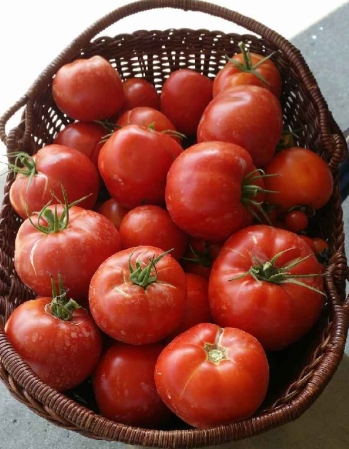 Ok, my tomato plants are prolific ~ I mean really going to town ~ like a million, billion, trillion tomatoes ripening every day !

Yesterday I picked 60 red, ripe, tomatoes (some a tiny bit spongy), from my FOUR tomato plants ~ three Big Boy’s and one Roma.

Last year we worked on the soil ~ adding and roto-tilling in top soil, mulch, and every leaf from every tree the leaf vacuum could chop up and spit out.   And this year, we’re reaping the benefits.   Sigh.

What’ll I do next year to DECREASE the crop !

With basket in hand, I’ve toted up driveways, knocking on the doors of strangers, even though we’ve been neighbors for a year or two or three.

But what the hell do I do with 60 tomatoes that are ready-to-go ?   I’m sure I checked on them the day before and they were still green.  And where are they going to go ?  Folks who have backyard chickens probably run into the same dilemma.  I mean, how many eggs can you eat each day, every day ?

I have to do something with the tomatoes, anything but bother the neighbors again or eat another white bread, mayo, and tomato sandwich ~ YUM !  One of the neighbors recommended freezing them.  Huh ?   I’d never heard of freezing a tomato; I envision dry ice and a tomato shattering to smithereens.

I’ve canned tomatoes before, you know, got into that whole homemade-is-best culture when I first got married. What ?  40 years ago ?    But it’s too much work for me today and I can choose not to do it.  Besides, I sold that paraphernalia years ago when the homemade fad came around again.  It’s probably generational.

So, what happens now ?  A friend suggests freezing them too; look it up on the web, she says, check out a video, she says.  I do; there’s boiling water and ice water, plunging and peeling, coring and cutting, then freezing and voila, you’re done.  Why not I say ?

OMG ~ it takes hours to bring a pot of water big enough to hold several tomatoes to a boil and to keep it boiling throughout the process.   (I swear water for spaghetti never took this long.)

I emptied the ice maker container twice and my hands looked chapped ~ in September !   (OK, yes, I was grateful/glad my ‘fridge had an ice maker.)

Coring and cutting ice-cold, slippery-as-eels tomatoes is not the easiest thing to do; you just get more tomatoes as you cut.   (No, I’ve ever held an eel and I don’t intend to freeze one either. Ha !) 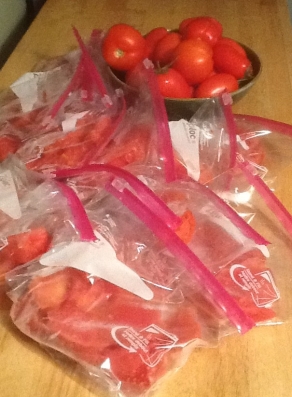 This is it ~ a dozen zip-lock baggies, about 45 tomatoes with the leftovers I just couldn’t touch, boil, plunge, peel, core, or cut ~ no, no, no more, I was done !

I can hardly say it ~ there are another million, billion, trillion tomatoes turning red on the vine as we speak !

I didn’t take any pix as I went along; I was way too busy concentrating on everything that was happening or not happening, on the stove, the counters, the pot, the colander and in the sink.

I’m sure spaghetti sauce on sale is cheaper/easier than this !

What to do next summer ?